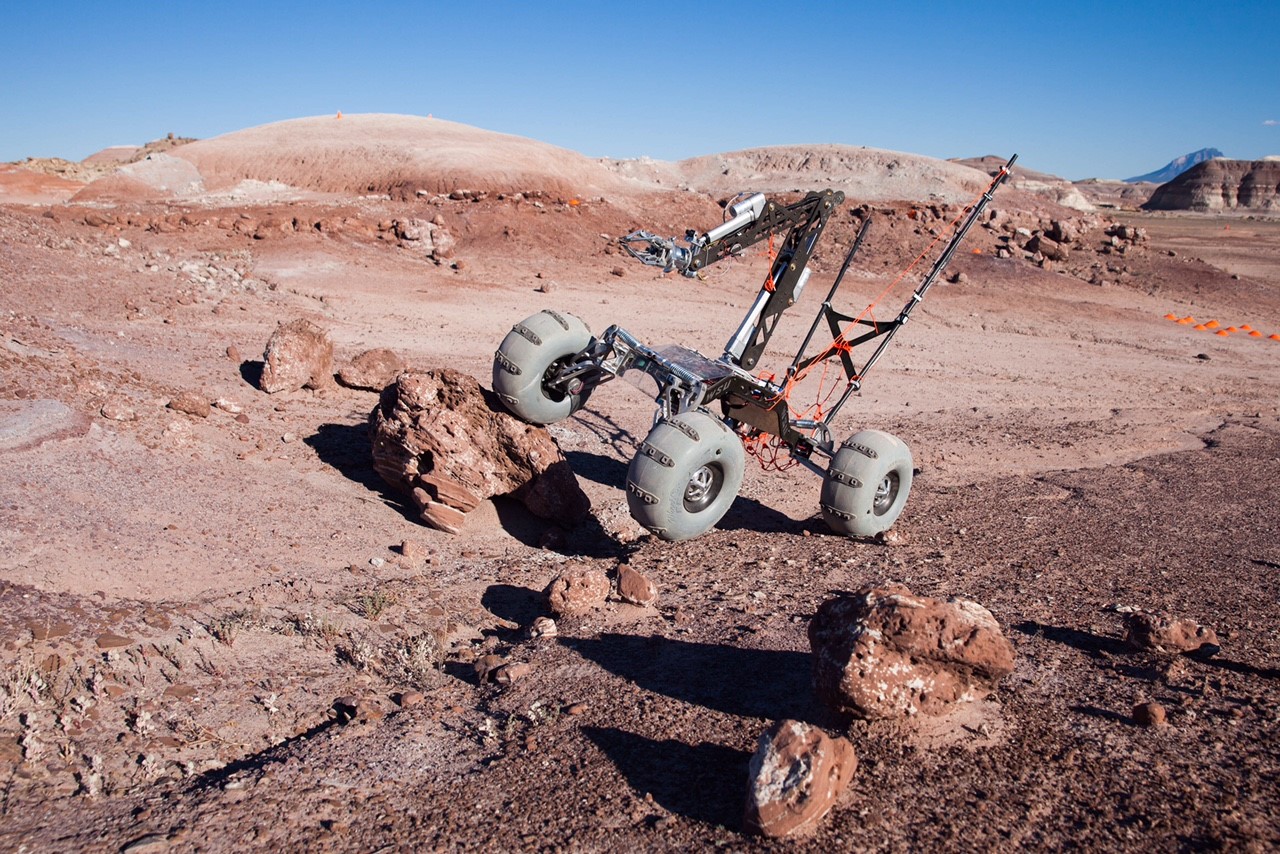 EVERETT, Wash. – The rust-colored badlands of the Mars Desert Research Station became a proving ground for aspiring engineers from around the world through
the weekend. And at the end, it was students from the Washington State University North Puget Sound at Everett Mars rover team standing on the second-place
podium, surrounded on either side by first- and third-place finishers from Poland.

The team of nearly 20 mechanical engineers from the Voiland College of Engineering and Architecture, several of them recent graduates who have held off
job searches in order to compete in the June 2-4 challenge, spent more than a year designing and building a Mars rover of their own. That rover is
meant to be able to work alongside human explorers on the surface of the Red Planet; tough enough to move over rough terrain, agile enough to pick
up and move a variety of tools and smart enough to test soil for elements that might help sustain life.

Blaine Liukko, a 24-year-old mechanical engineering major from Lynnwood, has been president of the WSU Everett Engineering Club for the 2015-2016 academic
year.

“I have never had a trophy mean so much to me,” Liukko said. “We started with a vision my junior year, and throughout my educational career, I have put
in well over 1,000 hours of blood, sweat and tears to make that vision become a reality. My team came together, each person taking on different responsibilities,
to build the best machine we could. Hard work does pay off and the emotions that came along with this accomplishment are second to none.”

The WSU Everett team was one of 30 semifinalists representing seven countries, including the United States, Bangladesh, Canada, Egypt, India, Poland and
South Korea.

Phil Engel, who will return to WSU as a senior next year, was the only student in the competition to earn an individual science award.

“This has been an amazing experience. Seeing how like-minded students from all around the world tackle the same set of tasks was
amazing. We learned from everyone there, finding new ways to do things, and making new connections along the way,” Liukko said. “The cultural experience
was one of the best parts of this competition.”

Teamwork was also critical to the team’s success. The students had responsibilities ranging from soil analysis to the chassis to the robotic arm, all coming
together under Liukko’s leadership.

“We learned a lot about how much reliability means to a piece of equipment that is controlled remotely. We ended up having a very reliable rover, but came
up with a lot of things that would make our rover perform even better.”

A career path in engineering

WSU Everett students are applying what they learn in real-life projects, giving them a hands-on experience that few engineering
students obtain through their education. They are getting practical experience in the fields that aerospace and advanced manufacturing companies are
looking for – electrical, software and mechanical engineering. And they won’t need to look far to start their careers.

“Like so many of our Voiland College students who participate in clubs and competitions outside the classroom, the Mars rover team worked long hours on
their project and gained tremendous, hands-on experience that makes them valuable to employers,” said Candis Claiborn, dean of the Voiland College
of Engineering and Architecture. “We are all incredibly proud of their inspirational efforts and success.”

Liukko, who earned his associate’s degree at Edmonds Community College before transferring to WSU Everett, will now begin his job search in earnest with
a significant addition to make on his resume.

“Graduation was not the end of my school career; this competition was,” Liukko says. “Now that we have completed the University Rover Challenge, I will
really begin my search, trying to find a company that follows my passions. I enjoy engineering more than I could have ever hoped and I cannot wait
to begin a career doing what I love.”

The WSU Everett Mars rover can next be seen publicly in Liukko’s hometown during Lynnwood Mayor Nicola Smith’s State of the City address on June 16.

“I could not be happier, nor could I be more proud of my team,” Liukko said.

Senior Mitch Elder has been elected to succeed Liukko as president of the WSU Everett Engineering Club, and he’s already hard at
work planning next year’s rover.

“Next year’s challenge is to take Rover 2.1 to the next level. Our team of future seniors has been kicking around ideas for improvement since the end of
day one at the Mars Desert Research Station,” Elder said. “We were so proud of our rover and what we accomplished that we were eager to answer questions
and showcase everything to other teams. Because of this, we are counting on other teams to do things like we did, which means we are going to have
to innovate things all over again.”

Elder will lead a small team this summer that will strip down the rover to finish the carbon components and anodize all of the aluminum so they can showcase
what he describes as a “truly gorgeous product” by the time fall classes start.

“I learned that the C in URC stands for ‘Challenge’ for a reason. It is not so much about competing with the other teams as it is about the scientific
community coming together to accept the challenge laid before it by the Mars Society,” Elder said. “I honestly cannot wait to get back to work.”

Photos of the rover and from the competition:https://www.dropbox.com/sh/w9rsfbiapoprwgg/AAD4LU9gOJrulCt4IhtgKT3Ba?dl=0

Video, including some competition footage:https://www.youtube.com/watch?v=dz3B7q15vUY